What does the future of Florida look like in the next 50 years? This question is probably the most interesting among all of the states in America. It is currently the 3rd largest state in the US with 21.5 million residents.

Meanwhile, it is expected to grow in popularity and increase to over 34 million people by 2070. So, there is a lot at stake here for both current and future residents.

Florida’s vast coastline and weather patterns make it extremely vulnerable to potential climate change issues. Florida’s major crisis will be to manage these issues along with maintaining public services to its estimated 13 million new residents.

But, it may not all be negative news. Cities and states have proven themselves to be resilient throughout the course of history by innovating and solving problems as they come.

So, the real question is what path will Florida take? Will the state succumb to rising ocean levels and disappear from all of history or will it start to thrive in the wake of a different climate?

Or, will Florida reach some balance in between where it can adapt to the future circumstances and reinvent itself as a leader in transformative living?

We put together 3 distinct scenarios that we think can be the future of Florida. The pictures that we paint may be extreme, but we wanted to give you a flavor of all of the possible outcomes.

But, remember that they are just predictions and nothing is set in stone quite yet. We all have time to help shape the future and move Florida onto the right path.

Either way, enjoy this look into the future of Florida with an open mind and think about what kind of life that you would want to live as well.

Our first scenario is quite a grim one. This is the one where everything goes wrong and there is a mass migration out of Florida.

How could this situation materialize? It would start with sea levels that rise above the expected estimates. Scientists predict that if sea levels rise more than 8 feet, cities like Miami would be completely underwater and other cities like Pensacola and St. Petersburg would face flooding risks virtually every year.

Additionally, natural landmarks like the Florida Everglades along with hundreds of miles of beaches would be wiped out.

The higher ocean levels would also start to pollute Florida’s water supply as the salty sea water would mix with the freshwater found inland.

On top of all of that, changes in the climate could make temperatures even hotter than they are now. The weather in Southern Florida could become unbearable for humans for most of the year.

Some staple crops that are grown in Florida like corn may also be unable to withstand the extra heat. There would also be less land to cultivate.

What would the status of Florida be if all of these events occurred? Residents who wish to remain in the state would most likely need to migrate north to Central Florida and the Panhandle. However, we predict that many other folks would just pack up and leave the state entirely.

The estimated population of 34 million could then dwindle down to 10 to 15 million, which is even less than the current population.

Meanwhile, the government would still face significant costs to try to manage the water supply and still keep their (new) coastline from flooding any further, but with less tax money since there would be fewer residents as well as fewer tourists overall.

Over time, this negative cycle of underfunded maintenance and more extreme weather conditions may turn Florida into one of the least desirable states to live in. The only bright spot we could imagine would be the development of the northern part of the state, but that would be contingent on major investments that its government may not have the funding for.

Now, we take a look at a complete opposite scenario where Florida actually strengthens itself over time and becomes the place to be in America. How could this situation happen?

The biggest economic threat to the future of Florida is the cost of damages from extreme weather events like hurricanes and flooding along with the devaluation of its real estate along the coastline, which stands to lose as much as $80 billion.

Therefore, if Florida does some proactive planning now and starts to heavily invest in fortifying its coastline, then the state could be in a pretty good situation. In this scenario, we also assume that the sea levels don’t actually rise above the predicted levels, leaving Florida in prime shape.

With these major issues being properly managed, Florida could then shift its investment money into developing and improving its existing cities.

Miami could become a shining example of how to manage and live on the water as the climate changes. Other cities like Tampa and Orlando could also benefit from improved city planning and expansion and become world-class destinations.

The infrastructure across the state could then be upgraded and become more efficient, which could actually lead to even more savings of natural resources over time.

Additionally, the new weather climate could actually benefit some of Florida’s biggest crops. The yield of soy and cotton could increase as a result of the warmer weather. That could lead to even more prosperity for farmers and, eventually, the state due to higher tax revenues.

What could these improvements mean to the state? We think they could attract even more residents and the projected population of 34 million by 2072 could actually surpass 40 million, making it the biggest state in the US.

The other two scenarios depict the most extreme cases in both directions. Therefore, we wanted to look at a situation that blends elements of each into one plausible outcome.

In this version of the future, Florida does execute a plan to fortify itself against rising sea levels, but it is still not entirely enough as portions of the state go underwater.

But, the preventative measures taken allow the state to preserve its economy and the majority of the real estate values along the water.

Meanwhile, many major cities will start to develop better ways to conserve the use of resources and make their communities more livable.

They start to promote a more local way of life by improving walkability and access to modern amenities like electric grids and shared working spaces. The urgency that these cities show today may allow them to become role models for future developments.

We also think cities in the north will start to thrive as more people migrate from the excessively hot areas in the south. Cities like Jacksonville and Tallahassee may develop into major business hubs, especially for tech-focused companies.

As for the farmers, we predict that they will find a blend of old and new crops to continue growing in the future climate of Florida. It will be enough to maintain their livelihood and make them more aware of how to engage in sustainable farming going forward.

Still, the reality remains that several coastal cities may disappear and a new coastline may emerge. The positive to this change is that these cities would get a chance to start over and plan a more futureproof community with the lessons that they have learned over the years.

Through this blend of positive and negative outcomes, we think that the population of Florida will remain on track to reach 30+ million by 2072.

The future is still unwritten, but we think that these are the most likely scenarios that will play out in Florida by the year 2072. We are hopeful that the future turns out to be  more positive, but it will take a lot of work and planning today to get it there. 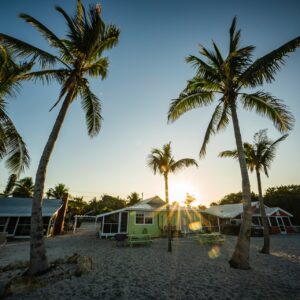